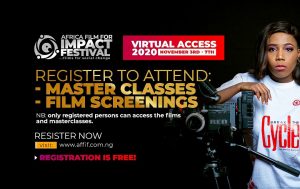 Some of Africa’s finest filmmakers will be hosting a masterclass on different aspects of filmmaking at this year’s maiden edition of Africa Film For Impact Festival (AFFIF) and Awards.

Film For Impact Foundation which is in partnership with High Definition Film Studio will hold the maiden edition of AFFIF, theme “Break The Cycle” via Virtual Access from November 3-7, 2020.

He said the masterclass which will be for established and upcoming male and female producers, directors, writers, actors who are passionate about impactful films, will be conducted via virtual access at the AFFIF 2020, and much focus will be on directing, cinematography, screenwriting, and acting.

“The hybrid Film Festival, which will screen short and feature narrative and documentary films with purpose over a 5-day period, will also host film premieres, master classes, panel discussions, workshops, and climax with an Impact Award ceremony, which will honor extraordinary achievements in filmmaking and driving social change through films.”

Stakeholders in both filmmaking and the social change sector are a major audience for this festival.